Winter Haven Police are searching for a missing and endangered elderly man who was last seen at Walmart in Winter Haven at 10:33 a.m. today.

LaJoie’s wife last saw him last night at their Winter Haven home on Carteret Drive. When she woke up late this morning, he was not at the home and their car was gone. Mrs. LaJoie called her adult son who immediately responded to the residence and then called law enforcement. Officers were able to determine LaJoie’s credit card was used at Walmart and upon reviewing the video, he is seen purchasing food at 10:33 a.m. today.

LaJoie is 5’9″ to 5’11” weaing approximately 115 pounds. He was last seen wearing a light blue shirt and tan or white pants. When he walked out of Walmart, he appeared confused as he wandered around the parking lot looking for his vehicle.

He left the parking lot in his 2011 4 door blue Lincoln MKZ – Florida tag# HJLJ42 in an unknown direction of travel.

Recent image of LaJoie and a representative vehicle photo are attached.

Anyone who sees LaJoie is asked to call 9-1-1 immediately. 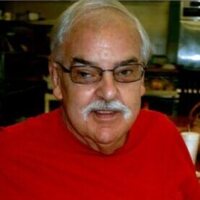