Auburndale, Florida – An Auburndale man, previously arrested and charged with kidnapping, false imprisonment, burglary and domestic violence on one victim, was arrested for the second time in less than 90 days on similar charges involving two other victims while out on pre-trial release.

Kyle Ray Cannon, 18 of Auburndale, Florida was taken into custody November 24th after a confrontation with family members led to charges of false imprisonment and domestic violence.

At approximately 3:30pm on November 24th, Auburndale police were dispatched to a residence in the 100 block of Winona Circle and met with the suspect’s mother and younger sister.

The mother advised that she had picked up her son (Cannon) from Peace River earlier in the day and that he cussed and yelled at her throughout the day because he was being asked to move out of the residence. When the mother and younger sister tried to leave the residence to avoid further confrontation, the suspect grabbed his mothers arm and pleaded that she stay at the home.

According to reports when both of the victims continued to try and leave, the suspect took the keys from the car.

When the younger sister got upset and tried to walk away, the suspect allegedly grabbed her by the back of the shirt and dragged her to the ground. Both victims were able to walk away uninjured and contact police who then arrested the suspect. Cannon’s bond was discharged and his pretrial release revoked.

According an arrest affidavit on September 10th, 2016 at approximately 12:30 am in the morning, Kyle Ray Cannon was outside the residence of a female victim at her bedroom window. The victim and the suspect were known to each other and the suspect was trying to convince the victim to speak with him.

The victim said she didn’t want to speak to him and told him to leave at which point the suspect pried open the bedroom window, entered her room and sat on her bed while still trying to convince her to speak with him. After asking the suspect to leave several times, the victim told the suspect that she was going to get her older brother to make him leave.

Becoming angry with the victim, the suspect allegedly grabbed her by the side of the neck and pushed her against the wall. While the suspect was near the open window, the victim tried pushing the suspect out of the window to make him leave.

As the suspect was exiting the window, the suspect reportedly grabbed the victim and pulled her out the window as well and forced her to the ground. Sitting on top of the victim outdoors and on the ground, the suspect allegedly grabbed her by the neck with both hands, chocking her until she couldn’t breathe. When she tried to scream, he stuck his fingers in her mouth to prevent her from screaming.

The suspect the stood up and dragged the victim by her hair to his 2002 Toyota Forerunner and allegedly forced her inside. The suspect then began driving around the neighborhood. When the suspect slowed for a stop sign, the victim attempted to flee the moving truck, falling and sustaining several abrasions on her hands and knees.

The victim was running towards her home when all of the sudden the suspect caught up with her and tackled her from behind. The suspect then again, for the second time, allegedly dragged the victim back to the truck and forced her inside.

After entering the truck the second time, the suspect punched the victim in her left eye with a closed fist.

The suspect then began driving around the neighborhood again. Upon seeing a second chance to escape, the victim again jumped from the truck and successfully fled to the safety of her residence.

After a successful second escape attempt, the suspect fled the area and was later arrested and charged with kidnapping, false imprisonment and burglary as well as domestic violence causing bodily harm and domestic violence by strangulation.

As reported above the suspect was on pretrial release, with conditions, since 10/19/2016. 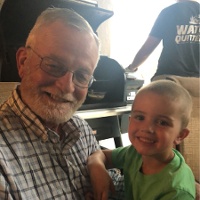